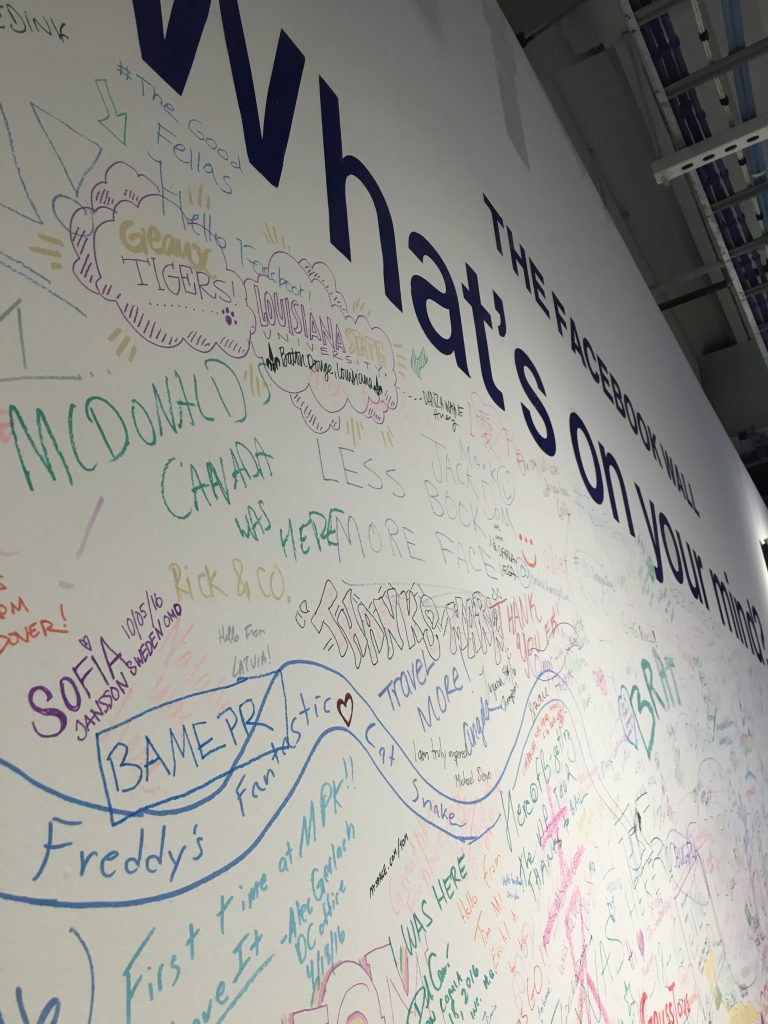 My Visit to Facebook: More Than Just a Tech Company in Silicon Valley

There is no doubt about it, Facebook is a cool company. Like many Silicon Valley companies it has all the talked-about perks of a technology company, but from the moment I arrived on its sprawling campus I sensed this place was special: In addition to the lack of dress code, free food, bikes to move around the campus available everywhere, and an arcade to blow off steam. But at the heart of Facebook’s campus, and throughout its campus are the constant reminders of Facebook’s efforts to communicate, connect and be something that another Silicon Valley does so well, be different. The walls around the campus showcase original art due to an artist in residency program surrounding its open workspace. There are silver mylar balloon numbers floating above some of the desks. Why? Look up Facebook profiles and learn they represent workplace anniversaries.

My tour was a part of my Public Relations Boutiques International (PRBI) annual conference. Two of the 38 member firms from around the world work for Facebook and gave us VIP access to the campus and the staff, who shared first-hand knowledge of how the company is continuing to change our lives and our businesses.

During my three-hour tour, I quickly recognized Facebook is special, and more than just the stats, which are impressive:

Facebook is one of the most influential companies in the world, and from what I observed, its workplace reflects a dynamic culture bent on not just influencing the world, but changing it. I’ve been to plenty of companies and offices, and rarely have I left one as such an evangelist. I know my on-line followers thanked me for allowing them to live vicariously through my on-line posts. And that’s the core of Facebook’s mission.

Every great PR pitch is about telling a story that captivates an audience. And Facebook’s story is continuing to evolve. Individuals and businesses owners, now more than ever have the freedom and resources to tell their own stories. Facebook is investing in a significant amount of human capital developing new tools to help you broadcast your experience and expertise to your target audiences or showcase your products and services to your customers.

Facebook currently employs 7,000 people in its Menlo Park office, 13,000 worldwide to develop technology like Facebook Live, allowing users to be a broadcaster from anywhere at anytime without having to go to journalism school. And, they make the process really easy. Companies are using video for storytelling and Facebook wants to make video capabilities more accessible to anyone who wants to share their experiences. It ties within what they call one of the five brand pillars: creating innovative technology that connects the world. Unless you work there, they won’t disclose the other four.

The Facebook Live team says there are 48 million daily Facebook Live viewers. And individuals will hang out three times longer than if your plain text posts. It’s so committed to being the first place to break news, it has a team dedicated to counseling influencers like politicians and celebrities who use Facebook Live. For example, Hillary Clinton used the platform to launch her presidential campaign.

All internal teams at Facebook use Facebook Messenger to stay connected during the day like most of us use email; and they believe other companies will do the same. This is why they have launched Facebookatwork, currently being used by a select group of companies. We were told it should be made available to everyone soon.

Facebook is a tech business at its core and the people who work there don’t shy away from their goal of making money. Facebook ads are expanding the reach of experts; consumer-facing companies connect with specific audiences highly likely to buy their products. Developing Artificial Intelligence is how Facebook “knows” what you might be interested. AI sifts through all of the data and content online and delivers relevant information to you based on your online activity, in case you ever wondered how specific content is always in your news feed: AI.

Virtual reality is becoming a reality, which is why the company purchased Oculus Rift for $2 billion in cash and stock in 2014. Facebook’s mission to create unique experiences is another reason why it purchased Instagram for $1 billion in 2012. Treated like a separate company, I found some of its employees spend more time there than Twitter.

Traditional media has its place as people are still monitoring breaking news and what is happening in their world. But more people get that news on social sites like Facebook. It is proving why the traditional media landscape has changed and will continue to evolve. As social sharing technologies continue to be introduced, it will change the way we tell our stories and the way I will continue to promote them.

Which of the Three Essential Video Types are Best for Your Law Firm?